01304 827609 info@use-ip.co.uk Find us
Menu
Log in
Register
Navigation
Install the app
More options
Contact us
Close Menu
You are using an out of date browser. It may not display this or other websites correctly.
You should upgrade or use an alternative browser.

The New Hikvision -I Series of NVRs
​
Hikvision have recently released their new -I series of NVRs into the UK market, and we're currently receiving stock and testing the new kit ourselves.

With 4K cameras looming on the horizon, many surveillance manufacturers are having to gear up in preparation for the demanding hardware jump to support them, and H.265 is also set to see more use in the following years. Both of these currently would not be possible on the existing -E series of NVRs, hence the demand for an upgraded series.

The -E series of NVRs have proven to be one of our bestsellers, and the 7608NI-E2 and 7716NI-E4 variants have been very popular in particular. Now, it looks like they're set to be superceded by the improved 7608NI-I2 and 7716NI-I4 variants, and so we grabbed a couple from our stock to put on our demo system and check out the improved features.

In terms of physical appearance, there is a clear design difference between the -I series of NVRs and the -E series. Whereas the -E series are relatively simple and subdued, the new NVRs are sleek and modern, with a touch-sensitive panel on the front with illuminated white buttons to either display information regarding the NVRs power and status, or to navigate the menus on a larger model (7716NI-I4 for example). 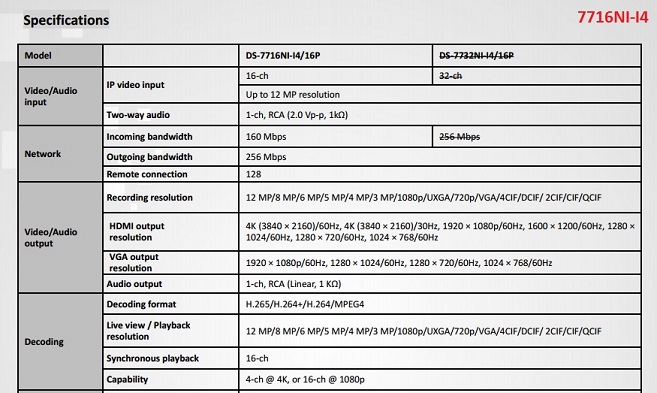 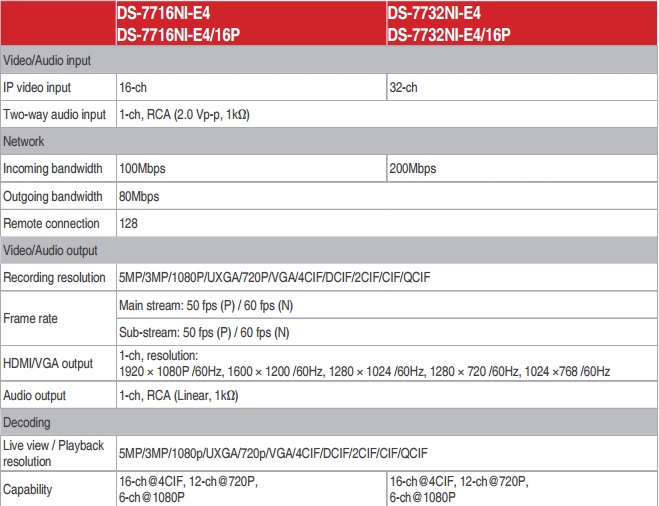 Designed with 4K compatibility in mind, the incoming bandwidth has been increased from 100Mbps to 160Mbps, allowing greater flexibility with camera bandwidth requirements, particularly when it comes to high-resolution cameras (up to 12MP).

However, more notably the outgoing bandwidth has been dramatically increased from 80Mbps to 256Mbps, allowing multiple 12MP cameras to be viewed either locally or remotely, something that simply wouldn't have been possible with the previous generation of NVRs, and indeed would be a tax on many PCs, so having an NVR with the capability of locally outputting a 4K stream is both convenient and impressive.

Similarly, the datasheet also reveals that the -I series of NVRs are capable of recording streams of 12MP, 8MP, 6MP and 4MP resolutions, as well as those supported by the -E series. 4K resolution starts at 8MP for reference, and so the 7716NI-I4 is definitely more future-proof and capable of handling the demands of higher resolutions.

Finally, the -I series datasheet shows developments in video encoding compatibility with regards to H.265 support, as well as higher resolution output for local monitoring via HDMI and VGA, and indeed both simultaneously thanks to dual monitor outputs.

Both NVRs now natively support Hikvision's own H.264+ video encoding, which aimed to optimise the existing H.264 video encoding and thus reduce the amount of bandwidth and storage required by your cameras. However, the -I series supports the next development in video encoding technology, H.265, which again aims to further improve video efficiency. Currently, the -E series simply won't be able to support it, and it's doubtful a future firmware update would be able to provide compatibility.

H.265 will be absolutely vital if your intention is to record a >5MP camera, and it is a video codec that is seeing increasing implementation.

Unfortunately, we currently don't have a H.265 compatible IP camera in the office with which to test functionality (hopefully soon!), but looking through the 7716NI-I4's familiar interface reveal mentions of H.265 compatibility, such as the below image which would allow you to enable H.265 by default when adding a camera to the NVR instead of having to do it manually whilst the camera potentially taxes both your network and the NVR too heavily. 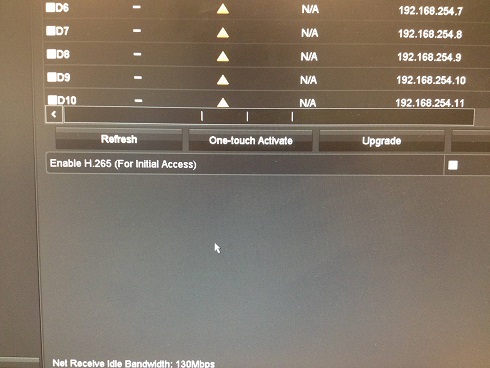 Both the -E and -I series of NVRs are capable of connecting locally to a monitor via either a HDMI or a VGA connection, and the output resolution was configurable to whatever was necessary. However, due to the 4K support of the -I series, Hikvision have implemented them with dual monitor outputs simultaneously, both of which are independently configurable. Similarly, you can configure what both monitors display locally via the NVR on the fly.

This is particularly useful when you want to monitor a 4K camera on a 4K monitor, but simultaneously would like to monitor the other connected cameras at a lower output resolution, such as 1080p. This avoids needlessly taxing the NVR with outputting two monitors at 4K, but also allows you to closely monitor a single high-activity camera for example, whilst not leaving the others completely unmonitored in the meantime.

The below image is an example configuration. 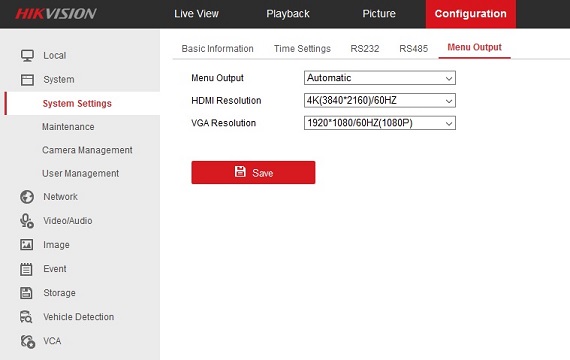 _________________________________
​
The hardware improvements are certainly a nice attraction by themselves, even if you plan on using neither of the above-mentioned features. That extra flexibility when it comes to camera bandwidth is a nice bonus and is often a deciding factor when designing an IP system

As is always the case, these are still early-days in this range's lifespan. With further testing and indeed future firmware updates, I'm sure we'll find many more features we like about the -I series of NVRs. This applies more so for this new range as the technology they're aimed at facilitating is itself still developing - 4K and H.265 is seeing widespread attraction and rapid improvements as time goes on.

Do you know the difference?

v3.3.6 only contained the STD version, so I imagine that's the standard firmware. I'll find out what the NEU is for you.
T

Hi Kieran,
thank you very much for the detailed testing of the new Hikvision 4K NVRs. I'm just planning to use one in a new customer project. However, I'm concerned about the the noise of an DS-7716NI-I4/16P. Is it possible to place the NVR in an office next to a desk where somebody is working. Or is the fan very loud? Do you have some experience with this?
Thank's for any information.

It's difficult to say because noise is so subjective.

They're definitely loud beasts, and louder than most office PCs would run. If you install four HDDs and none of them are sleeping, then it becomes even louder. I currently have a DS-7208HGHI-SH, DS-7608NI-E2-8P and a DS-7716NI-I4-16P on my desk, and the 7716NI-I4 is definitely the loudest (although it is of course the largest system).

I personally don't mind the noise, and might not be too bad in an office environment, but I can't give you any guarantee what your client might think
T

Hi Kieran, thank you very much for your reply. I will put the NVR in a different room near the toilet. I would like to run a long HDMI cable (10m) to a monitor which is situated in the office. In addition I will need 2 longer USB cables to connect mouse and keyboard. Do you have experience if the NVR can handle USB extensions?
Thanks
Henrik

I'm not sure on what the maximum length you can run a HDMI from the DS-7716NI-I4-16P is before you encounter sub-optimal performance, but 10m will likely be fine.

How far were you thinking with regards to the USB cables?
T

I'm also thinking about minimum 10 m but I just searched on amazon and found some usb extension with active "support" - concerning the reviews it should work quite well.

I will test it in the next weeks and will keep you up to date to share my experiences.
T

So - I did my test today and everything is working fine. I used 2 x 15 m USB 2.0 extensions and 15 m VGA cable and 15 m HDMI cable in my tests. This worked well.
I have another problem with my DS-7716NI-I4-16P. I installed 2 x Western Digital red 4 GB HDD. In the NVR the two HDDs are displayed with Label 1 and 3. However, every time I connect a USB stick (16 GB) the second 4 GB HDD capacity changed into 14,56 GB. It seems that every time I connect USB stick (on the third USB port) it lost its connections to the second HDD connected via SATA.
Does anybody have an idea where this derives from? The only way to get back the second 4 TB HDD is to reboot the NVR.
You must log in or register to reply here.

How-to: How do you Shutdown a Hikvision NVR?

M
Have I bought a fake / copy of a HickVision NVR? My HiLook NVR 104-MH -C/4P looks different to those I've seen online and the GUI is not NVR 4.0.