01304 827609 info@use-ip.co.uk Find us
Menu
Log in
Register
Navigation
Install the app
More options
Contact us
Close Menu
You are using an out of date browser. It may not display this or other websites correctly.
You should upgrade or use an alternative browser.

I've only got the one camera at present attached to my NVR which has 6tb in it so Ive got plenty of time before it writes over itself.
Is there a way to stop the NVR overwriting certain footage that I would like to keep like how a dashcam works?

Ive not installed the camera yet, its just sitting on the window sill so its hard to spot. Although the previous owner had what looks like a camera, but looks more like an IR device which is situated just under the gutter and I noticed they were paying particular attention to that.

I tried downloading the files but they kept cutting off half way through the footage.

Some CCTV manufacturers provide footage locking features to allow you to lock parts of the playback timeline to stop them from being recorded over, but we would need to know the brand & models you have to give you a better answer as to whether your system can do this or not.
R

Hi Dan, its the Hikvision DS-7616NI-12-16p
I couldn't find any reference to protecting parts of the footage.

Are you accessing the NVR with a browser or a direct HDMI/VGA monitor?
R

The NVR is in my living room so I generally just access it that way direct.
R

Hi @Dan any update on this?
Thanks.

apologies, I was out of the office last week.

When accessing the NVR with a direct monitor you can go to the File Management menu (folder icon), search for the time frame when your event activity happened (or search by event if you had a smart event set) and then a list of files will be displayed in a table. Find the files that cover the time of your event and click the padlock icon on the far right of the table to lock each file so they won't be overwritten. This is explained below in a bit more detail: 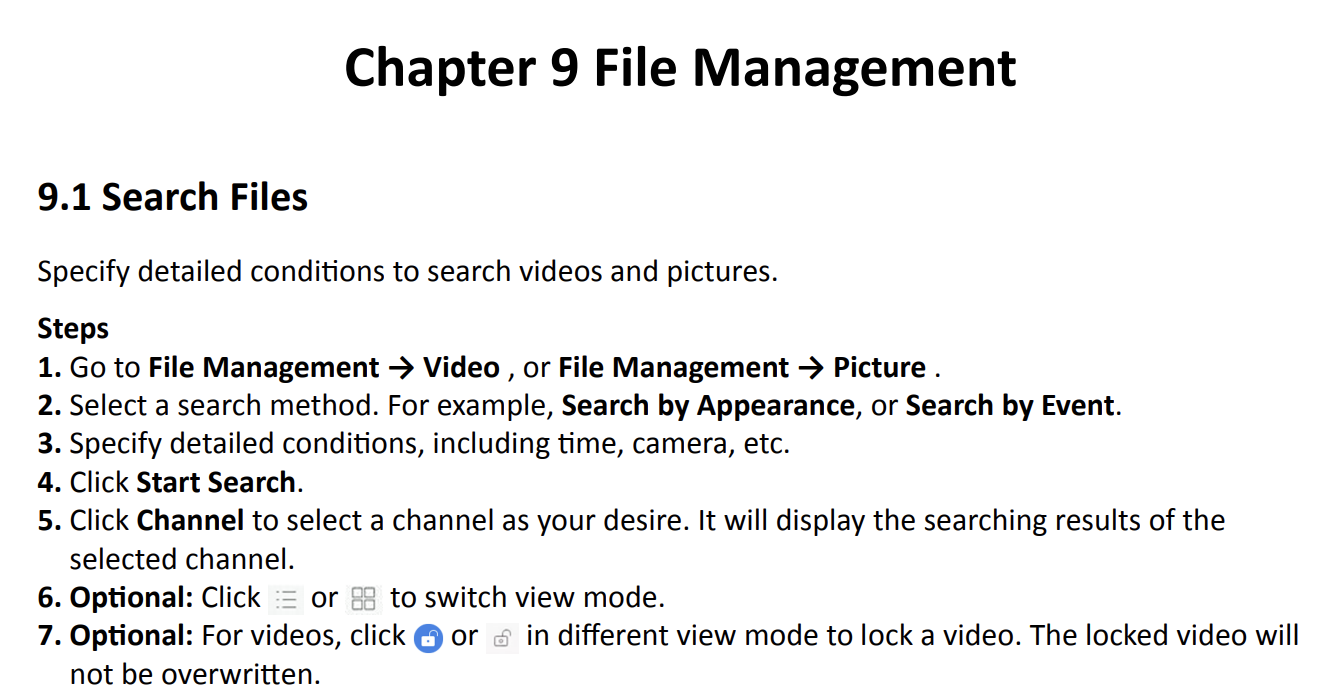 Excellent. Thanks very much for this @Dan
R

I tried following the instructions and although I put the time parameters to only a 10 second clip, the NVR returned a file at over 50 minutes long with the clip I wanted to lock buried about 15 minutes inside this.

Does anyone know if that is correct as I'm just looking to purely save my video clips that are all under a minute long?

Yes, this is correct because you probably have your storage packet time set to 50 minutes.

The Hikvision NVRs segment the continuously recorded footage into packets of a set duration, this is so that the HDDs and the NVR software can better manage the footage.

You can adjust the packet time, but as far as I can see (from scanning the direct monitor menus) this setting is only available when logged into the NVR using a browser. (see below) 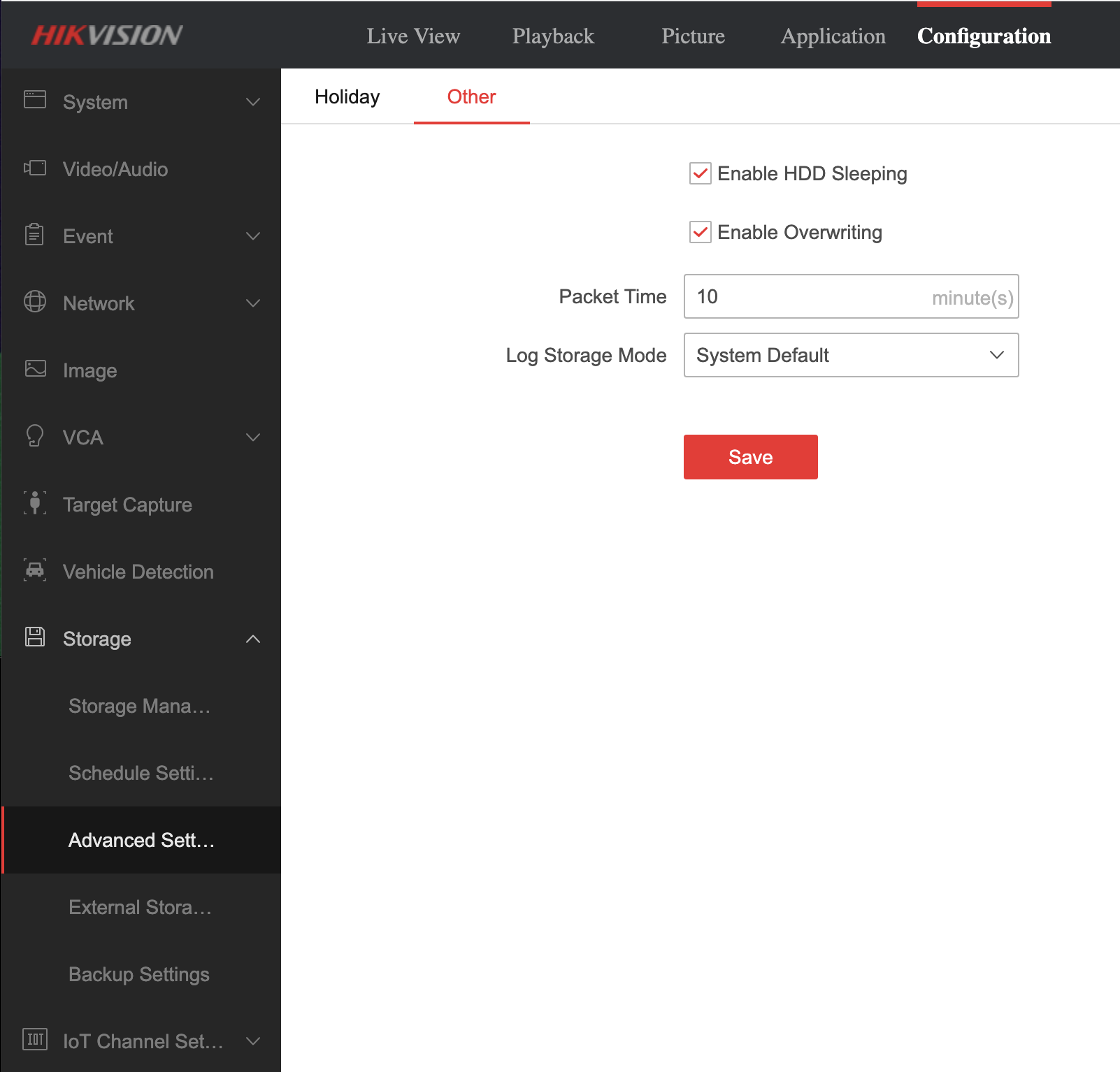 Also, this setting will only apply to footage recorded after you change it. The packet that your event is inside is locked at that 50-minute duration so you will have to lock that whole 50-minute file if you want to stop that event from being overwritten.
R

Thanks again @Dan
Ive just checked mine and the packet time is empty.
I take it if you set it to a smaller packet time, it won't utilise the full capacity of the hard drive.

If the box was empty it will likely have defaulted to 50-60 minute packets.

Packet time does not change how much of the storage capacity is used, it simply changes how the footage is divided. So as you currently have it set 1hr of footage will be packeted into one 50-60minute file, but if you set the packet time to 10 minutes that hour of footage will now be split across 6 files. This means that when you next come to search for a few seconds/minutes of footage you will be presented with 1 or 2 10 minutes files rather than one 50-60minute file.
R

Thanks @Dan that makes perfect sense.
If lowering it to 10 minutes doesn't cause any issues I'll just do his for the future.
Thanks

You must log in or register to reply here.

R
Can I record road outside of my house in UK?

Is there a way to stop 'Preset' number appearing on screen?

A
what is the best way to protect the recorded videos from being stolen?

Apr 14, 2021
aeroxr1
A
T
is there any way to find or recover the camera's verification code or a lost password when connecting the camera to EZ VIZ app